Articles in this section

In CCTV, multicast is a method of sending one video stream to a group of interested receivers in a single transmission. It is a form of point-to-multipoint communication to reduce the bandwith in the IP-network. 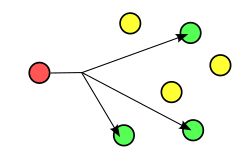 One stream is send to the first switch as point-to-point. In the switch the stream is copied and paste to all requesting receivers. In multicast the switch is the point-to-multipoint device, not the camera or the encoder. For multicast the address range to use is, 224.0.0.0 - 239.255.255.255

You can also use the standard unicast. In unicast for each requesting receiver a seperate stream over the IP connection runs towards the first switch. The disadvantage of unicast is that with each additional stream the bandwith increases.

The advantage of multicast is, there is no increase of the bandwith.
However this is only valid if all receivers use the same portnumber. If  X different port numbers are used, the number of video streams send from the transmitter (camera or encoder) are also X. And the total bandwidth grows to X-times the bandwidth of one videostream.
With multicast you often can set a port number in the transmitter. This is no more than a default (suggestion or advise). If in the receiver another portnumber is used than the default from the transmitter, than this other portnumber will be used.

Article is closed for comments.